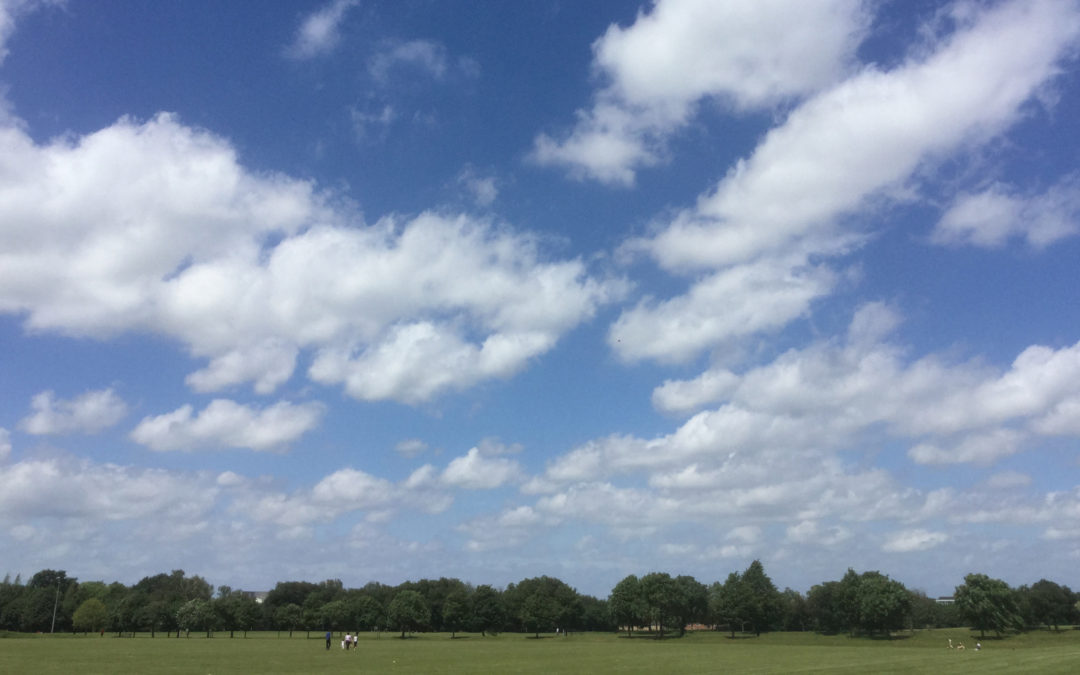 Parks can be new or old, large or small, and urban or wild. The Eaton Park that Ceceile and I have come to know and love in our two years in Norwich is a city park not yet a century old, and so still young by British standards. Eaton is quite large for a city the size of Norwich and, of course, very much a part of the surrounding urban fabric of houses, schools and businesses. However, there is also a wild naturalness about Eaton Park that I notice most times I walk through it on my way to work. All I have to do is to look up at the Norfolk sky from Eaton Park’s colonnaded center to enjoy the towering spectacle of clouds that — as the Fenland poet Edward Storey insists — “are to us as the Himalayas are to the world of Asia.”  Or as the writer Charles Kingsley put it: “Overhead the arch of heaven spread more ample than elsewhere, as over the open sea…such cloudlands, such sun rises, such sunsets, as can be seen nowhere else in these isles.”

The elegant geometries designed into Eaton Park by A. E. Sandys-Winsch in the 1920s bring the natural world of cloudlands, flower beds, migratory birds and chirping crickets close to us even as park patrons gather together to enjoy each other’s company in outdoor pursuits ranging from picnicking and dog-walking to team sports, model boating and train rides.

Eaton Park is very local in its East Anglian topography and in its native varieties of flora and fauna; but it is also attuned to shared and global concerns about park development.  Eaton Park has its Saturday Parkrun, a British innovation designed to make healthy exercise available to everyone.  Singapore, an island nation Ceceile and I visited in 2013 as part of an ongoing research project of mine on global park development, now hosts a Saturday Parkrun as well.  The route is a bit different than the symmetrical paths the Eaton Parkrun follows since the West Coast Park in Singapore is a long, root-like twist of green squeezed between container ship docks and a busy highway and races begin at 7:30 am on account of the tropical heat. But the spirit is the same.

In Singapore we also met park supporters very much like our fellow Friends of Eaton Park.  I studied the successful efforts of a diverse band of nature enthusiasts, scientists, retirees, native Singaporeans from many different ethnic, class and cultural backgrounds, and ex-pats from Britain and other countries in persuading the government to support conversion of a former colonial rail line to a linear park.  Singaporean friends of the “Green Corridor” speak the same language as we do, peppering their conversations with words and terms like health, fitness, bird populations, access, tree removal, publicity, and park heritage.

They are friends of Singapore’s new Green Corridor just as we are of our park. They are “friends” in the specific sense of persons who support a good cause for the benefit of the larger community, but also in the more familiar meaning of a person who cares about other people. And, like many of us, they recognize the importance in today’s world of having nonhuman friends, including parks or green spaces as built and natural environments composed of a myriad of living and nonliving things that need caring for and that are able to return the favor.

I used to think the idea of having a park bench or a tree as a friend was a bit over the top. I see now that park-going and park preservation involves creating and nurturing just such mutually beneficial relationships, no matter whether the green ties that bind take hold beneath the cloudlands of East Anglia on Groundforce* day, or under the equatorial sun of Singapore on a nature walk in search of rare butterflies. As the Oxford English Dictionary records the evolving meaning of the word friend in a 1998 usage: “The seven-spot ladybird…is a friend of gardeners and farmers because of its voracious appetite for aphids.” And let’s not leave out the aphids. What would ladybirds have to eat without them?

*Groundforce takes place the first Thursday of each month. Meeting at the rotunda, a varying group of Friends don hi-vis jackets with the Friends logo on the back and set out to pick up litter, clean notice boards and deadhead roses. David’s patch was the bandstand flowerbeds, which he tended with care and great pleasure throughout his stay in Norwich.